Let’s take a look at a rather specific but basic exercise called Lee Haney’s behind the back upright rows. It’s aimed at the development of the trapezius and deltoid muscles of the shoulder girdle (posterior bundle). The exercise was named after its inventor – the famous bodybuilder and eight-time “Mr. Olympia”.

The original exercise is performed with a barbell. Nowadays, there are adapted variations involving the use of dumbbells. This is due to the increased complexity of the original version. 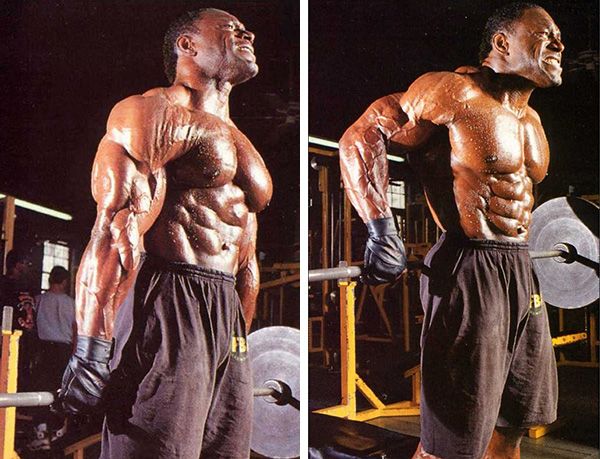 The basic barbell exercise is more focused on trapezius muscles, while the dumbbell exercise option provides a good isolated load on the posterior deltoid muscle bundle

Not all athletes can maintain the correct technique. Many people say, that the bar significantly limits movement plus touches the buttocks (with an insufficient level of training). The last one was partially solved by the Smith machine. As a result, not everyone can get to the development of the deltoid muscles.

Therefore, over time, the emphasis shifted towards dumbbells and, accordingly, a greater load on the deltas. In general, the exercise works the shoulders well. Let’s analyze it in more detail.

What muscles is the exercise aimed at?

Lee Haney used his exercise to train, first of all, the trapezius muscles. As I said above, the posterior deltoid muscle also works. The use of a dumbbell instead of a barbell increases the number of ways to influence the delta. In other words, when using a barbell, the amplitude at which the shoulder moves is severely limited.

Lee Haney’s behind the back upright rows is very similar to the barbell shrugs, with the only difference, that the barbell is at the back (respectively, behind the back). You may perform the exercise in a Smith machine. By the way, some athletes do these two exercises together, thereby perfectly working out the trapezius muscles.

With dumbbells, the technique is as follows:

1Stand with your feet shoulder-width apart. You may lean forward a little. Straighten your back (slight deflection in the lower back is allowed)
2It’s usually recommended to do the exercise with one hand, one at a time. Try to slightly bend the dumbbell arm at the elbow
3Stretch your arm up as you inhale. We are actually doing the side dumbbell row. Your goal is to raise your elbow as high as possible without bending your elbow. The main movement should be at the expense of the shoulder joint. Try to concentrate your efforts on the rear deltas
4As you exhale, gently return your hand (or both hands if you are doing it at the same time) to the starting position. Repeat the required number of times (usually 7-10 reps)

“Stretch your elbow along the body. It contributes to the creation of an isolated load on the posterior deltoid muscle.”

With your free hand (if you perform the exercise one at a time), you can create support, for example, rest against a wall.

What else should I know?

Bending your elbow will load your biceps. You need to raise your elbow, as high as possible, but you cannot move the elbow joint and hands.

“Additionally, you can unload the biceps with the help of wrist straps (if it is difficult to hold the dumbbell).”

Thus, this exercise is one of the few allowing you to effectively develop the posterior deltoid muscle alongside trapezius muscles. The work of latissimus dorsi is practically excluded, the target area, on the contrary, receives an isolated load.

Remember, the key to success is following the technique as closely as possible. As soon as you start bending your elbows or using “cheating”, the load will shift to other, more developed muscles, and your training will become ineffective.

Wrist Curls – Work Out Your Forearms And Grip Properly

Wide-Stance Squat Or Sumo Squat – Do The Exercise With Perfect Technique!

We will be happy to hear your thoughts